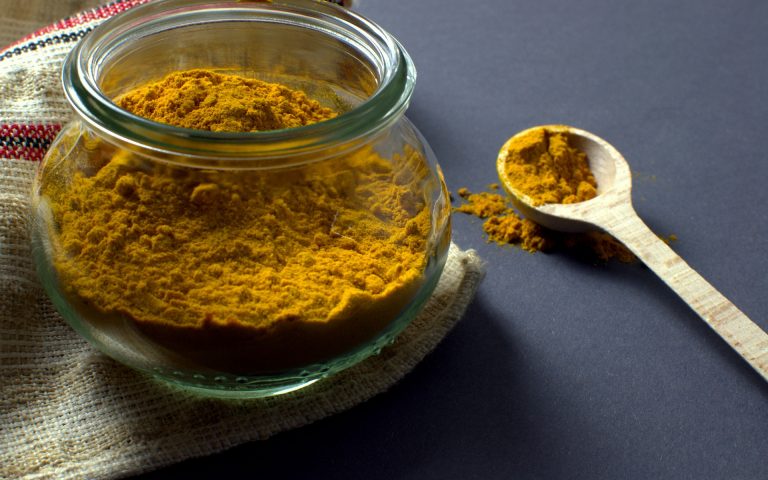 Wait, can dogs eat spices? Absolutely, and turmeric for dogs is one of those spices you should add to your dog’s food if you want him to live a healthy and happy life. Here is all you need to know about turmeric and how it benefits your furry friend.

Turmeric was a popular spice in Vedic culture as early as 4000 years ago. The spice not only added flavor to food but also found purpose in healing and religious rituals. Modern medicine uncovered the superpower of turmeric’s curcumin. Curcumin has health benefits enjoyed to date.

Curcumin is a natural anti-inflammatory, antioxidant, antibacterial, antifungal, and antiviral ingredient. Not only is curcumin a natural wound-healer, but it has anti-carcinogenic properties.

Humans were the first to rip the benefits of curcumin. Now our fur babies have been let in on the fun.

Here are seven properties of turmeric curcumin, that will directly benefit your pup.

Turmeric for dogs is a natural anti-inflammatory.

A common problem in dogs is inflammation of the joint or muscle. Also, inflammation is a symptom of bacterial, viral, or fungal infections. Inflammation happens when the body produces white blood cells to fight infection.

While mild inflammation clears on its own, some diseases cause chronic inflammation that can be painful and stressful to a dog. Some of these diseases  include;

Encephalitis infects the nervous system of a dog and negatively affects the spinal cord and brain. Bacteria, viruses, fungi, parasites like worms, or ticks can all-cause encephalitis. Steroids help reduce inflammation caused by this disease. Yet, turmeric is an ideal substitute for steroids because it has no side effects.

Demodex mites, which hide in the hair follicles, are the cause of mange in dogs. Canine mange causes skin irritation and inflammation that leads to rapid hair loss. Medicated shampoo or dips are a widely used solution for treating mange in dogs. But a more long-term and holistic approach to treating Demodex mange in dogs is by using turmeric curcumin.

Scientists have also discovered that curcumin can help alleviate inflammation from;

Turmeric for dogs is a natural painkiller.

A lot of vets would recommend paracetamol or aspirin for pain relief in dogs. But some dogs may develop resistance to these drugs. Rather than spend more money on drugs, why not use turmeric curcumin to cure pain.

Turmeric has been a remedy for pain since 4000 years ago. You can use turmeric paste topically on the affected part. Alternatively, you can add curcumin to dog food. Turmeric will take care of pain naturally without causing any other side effects.

Once more, corticosteroids are prescribed to address inflammation caused by inflammatory bowel disease. But what if we switch things up with curcumin for dogs? Your dog gets to heal faster and with fewer side effects to worry about.

Turmeric for dogs can prevent and cure canine cancer.

Science has proved that curcumin has anticancer effects on the human and animal body. In a case study conducted using turmeric, scientists discovered that curcumin stops body cells from fully mutating into cancer cells. Also, curcumin kills cancer cells, which slows the spread of tumors in dogs.

A dog that is undergoing cancer treatment can supplement with curcumin in its diet. Turmeric is natural and will not react or hinder the effects of other medications.

Another selling point of curcumin in turmeric is its antioxidant properties. It slows down the oxidation of body cells, a process that speeds up the aging process. Want your puppies to look youthful even in their senior years? Start them off on turmeric for dogs and their lives will never be the same?

How do you prepare turmeric for dogs?

Dogs can’t absorb turmeric directly into their blood vessels. For this reason, we have to mix turmeric with other natural ingredients that are easily absorbable. Most pet owners prefer mixing turmeric with coconut oil, black pepper, or olive oil.

Add two tablespoons of turmeric paste into your dog’s food and mix it up before serving. Some dogs may not like the earthy smell and taste of turmeric. A quick fix trick is to add Bullyade beef or chicken flavors into the mixing water. Once dissolved, mix it with the turmeric and boil into a paste. The beef and chicken flavors will hide the turmeric taste. Bullyade also has healthy vitamins and minerals for your dog.

Alternatively, you can get creative and whip up delicious treats for your dog using turmeric. This turmeric doggy treat recipe is a good place to start!