How to Stop your Dog from Jumping on People 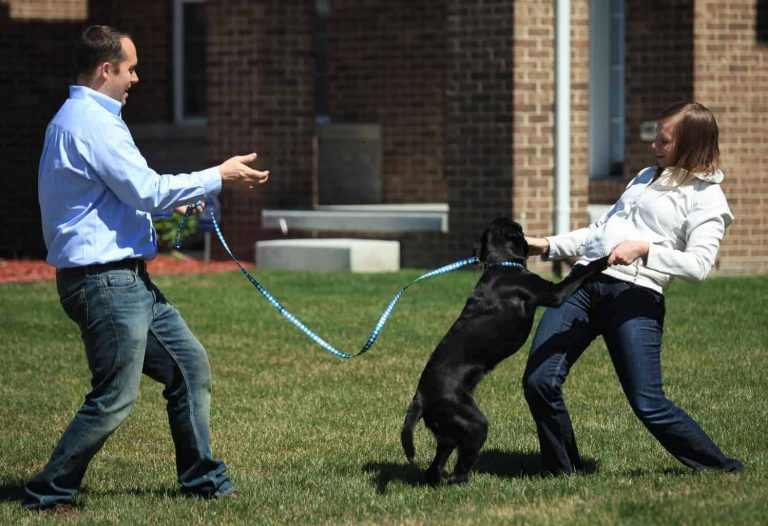 How to Stop your Dog from Jumping on People

When dogs are excited to see you, they like to run up to you and jump on your laps. This is their way of saying hello which we find it adorable especially if it is a puppy. However, what if you do not want your dog to do the same on your guests whenever they come visiting?

Training your dog not to jump on people is a technique best taught when he is still a puppy. Younger dogs are fast learners plus you will have enough time to ensure he gets the new command you are teaching him. Without further ado, here is how to stop Bingo from living paw prints all over your best jeans whenever he sees you.

Yes, do not engage him when he runs and jumps on your lap. Dogs jump on you to say hi or if they feel anxious and want you to pick them up. Generally, they are looking for attention which you will give them but not the way they want it.

When Bingo sees you are not interested, he will have no other option but to put his paws back on the floor. Immediately he does that, turn to him, part his head and reward him with praises. He is likely to jump on you again, so repeat this process once more.

Teaching your dog not to jump on people can be a lot easier if he knows how to sit when he is told. The next time he comes running ready to pounce on you, tell him to sit before he closes in. If he obeys the command, say hello while patting his head for obeying your command.

Some dogs are likely to forget and pounce on your immediately you pat them. If this happens, deny them attention once more until their paws are on the floor. Immediately he sits and behaves, pat his head while praising him for obeying your command.

The next time you come home and your pup is ready to jump on you, go back outside and close the door. He will whine and scratch at the door because you did not come in to say hi. Once the scratching stops, peek through the door and ask him to sit. Immediately he does so, walk in calmly and pat his head. If he forgets and jumps on you, well, it is time to initiate point number one above.

Dog’s learn faster when they are rewarded for getting things right. So whenever he sits or has his paws to the floor as opposed to pouncing on you, reward him. However, do the rewarding at intervals; for example, if you offer him a doggy treat now don’t offer another the next time he obeys. This way, your dog will learn that the obeying part is more important than the reward itself.

Do not yell or scold your dog while training him not to jump on people. This will only hurt his ego causing him to grow up as a lonely withdrawn dog. You only need the two main techniques explained here; denying him attention when he pounces on you and rewarding him when he has his paws on the floor.

Give him the Best Vitamin Supplement for dogs, Give him Bullyade.